"It only stops Unsafe Abortions" 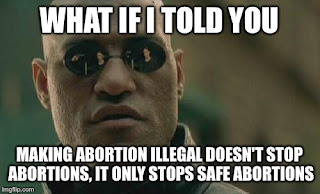 Previously, I wrote that incentives almost always matter. The more interesting question is, how much do they matter?

If your politics are pro-choice, you likely think this argument is solid. There's something valid about it; when you restrict abortion you create an extra incentive to do an unsafe at-home abortion. But the claim that it only stops safe abortions seems ludicrous to me.

In the other post, I wrote that to determine how much incentives matter, "I use some introspection and empathy in combination with empirical research and data." Memes like the one above determine how much via political commitment. To be a good member of the pro-choice community, you should believe that every abortion made illegal results in one more unsafe abortion at a perfect 1:1 ratio.

When I instrospect, I notice that desire for an abortion is a spectrum (just like everything is a spectrum). I might be anywhere from almost undecided as to whether I want to go through with the pregnancy, to absolutely against it. If I'm sufficiently undecided then a legal abortion sounds good, but a clothes hanger sounds like a terrible idea. If I'm sufficiently convinced that I absolutely do not want to have this child, then I'll do anything to stop it from being born, including an unsafe abortion. I dare say; most of the spectrum where I can imagine real people lye is between having an abortion if it's safe, and not having an abortion if it's unsafe. I think for most people having an abortion is a hard decision, and something like abortion being illegal and unsafe tips the scales toward one more birth. 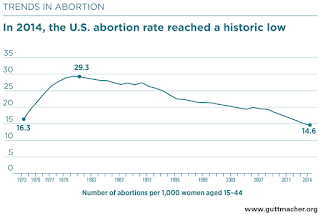 When I observe data, I see a large spike in abortions after Row v. Wade in 1973 (when abortion became illegal in the U.S.) The number of abortions doubled from about 600,000 to 1,200,000 in only 6 years. As far as I can tell this doesn't estimate non-legal abortion so it's not impossible that unsafe abortions declined by the same amount as legalization allowed legal abortions to crowd all these dangerous illegal abortions.

But this doesn't seem to be the case. It's hard to find how many unsafe, illegal abortions are performed for obvious reasons, but we know how many women die as a result. According to the CDC, 39 women died while performing an illegal abortion in 1972 before Row v. Wade passed, to 7 women 6 years later in 1978. As one might expect (because incentives matter), the number of deaths definitely go down quickly after Row v. Wade.

But remember that during this time legal abortion rates doubled. If all these abortions are substitutes for illegal abortions, then we've got 600,000 illegal abortions being performed before Row v. Wade, and only 39 deaths? Either we have to rethink the word "unsafe" in the term "unsafe abortion" or making abortion illegal really does decrease total abortions.

I think the common pro-life criticism amounts to incentive denialism. Incentives don't matter. The number of unsafe abortions will stay the same regardless. This is wrong. So is the view that incentives matter perfectly; "it only stops safe abortions". No, it's pretty clear that it stops total abortions too.