1. Is Economic Growth a Moral Imperative? A structurally odd talk by Tyler Cowen.

2. Blank-slate feminists and socially conservative gender essentialists make up a small proportion of the population, but social media keeps feeding moderate, sane people the excesses of either side.


"Despite the best research we have indicating that issues of gender seem to be partially innate and partially the result of social learning, with serious and informed debates negotiating how much role each plays, the culture war over gender consumes all of this reasonable middle ground and hopelessly polarizes the discussion."

The Pendulum Need Not Swing

3. Race, Genetics, and Pseudo-science: an Explainer


If an alien, arriving on Earth with no knowledge of our social history, wished to categorise human ancestry purely on the basis of genetic data, they would find that any consistent scheme must include many distinct groups within Africa that are just as different from each other as Africans are to non-Africans

I know a lot of this stuff already, but it's nice that someone packaged it all up together and wrote a scientifically credible, "here's why race realism is wrong" paper.

Of course, it is. If we say it then it's a word. Even if it weren't in the dictionary (which it is) it would be the dictionary's mistake for not including a word we say all the time.

As I type this, nother gets spelled check underlined depending on whether the words "a whole" is behind it.

By all accounts, nother is a word, it's just a structurally odd verbal abomination that doesn't get written very often.

Fraction of all US wealth owned by Boomers & Gen-Xers when the average member of each was age 35:

There will surely be political implications.https://t.co/j1pNrt8mll
— Kurt Andersen (@KBAndersen) November 24, 2019

I don't immediately interpret this as a bad thing. Even if younger people hold a smaller percentage of the wealth, they will eventually get older and hold more of it. 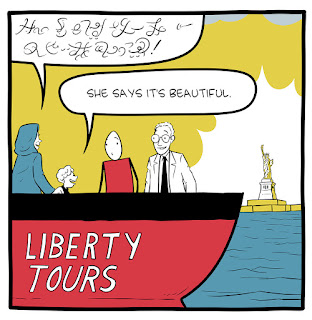 7. This old debate video between Elizabeth Spelke and Steven Pinker on why there aren't more women in science is one of my favorites.

8. In a previous post, I observed that Google promoted a perfectly secular "true meaning" of Christmas. I thought this ignores millions of evangelicals who celebrate it as a religious holiday, and that, just like other symbols, Christmas means different things to different people.

I've noticed this sort of thing before, but now I feel like I should start documenting them.

Thesaurus.com's list of synonyms for "Politically Correct" is really weird. Political Correctness is very unpopular, the word is used in a derogatory way all the time, yet none of its synonyms have any negative connotations. On the contrary, some of the synonyms they list are, "non-racist" "non-sexist" "inclusive" and my personal favorite, "political views bias-free"

9. I normally wouldn't give conspiracy theories the time of day, but John Mcwhorter and Glenn Loury are no fools.

10. Matt Taibbi entered my radar after an interview with Joe Rogan. Here is a very good talk by him on Donald Trump's exploitation of the news media. The questions at the end are good. Drink every time he says, "in the old days..."

11. A reporter for Newsweek wrote that Donald Trump would spend Thanksgiving, "tweeting golfing and more." In actuality, Donald Trump visited troops in Afghanistan. The reporter has now been fired.

I wonder, what would have happened if Donald Trump hadn't surprised the troops? Why do journalists feel like they can just make things up?

12. This is the Global Slavery Index which claims tens of millions of people are slaves.

Of course, I'm skeptical so I look into their methodology. They use the term "modern" slavery frequently, which initially made me suspect they were toying with definitions to get their shocking results.

The first category they call slavery is forced marriage, which a lot of countries still practice. Being treated like a slave in regard to one very important decision in your life is kinda like slavery. But it's different from being forced through violence into a full-time workweek (dare I trivialize forced marriage?)

The other category of slavery I'm skeptical of is wage slavery. It's the idea that if you're paid subsistence wages then you are basically a slave. Of course, there is an important difference between coercion and very low wages, that is when you take away the coercion the person is naturally placed into better alternatives, whereas if you take away the very low wages the person is naturally placed into worse alternatives. It's unclear whether the Global Slavery Index includes so-called wage slavery, but based on the questions they ask I suspect maybe they don't.

13. Earlier I wrote about the fantastic humor of Christian conservative site Babylon Bee. Here is a Reason interview with Babylon Bee.

14. Moral acceptability according to public opinion: 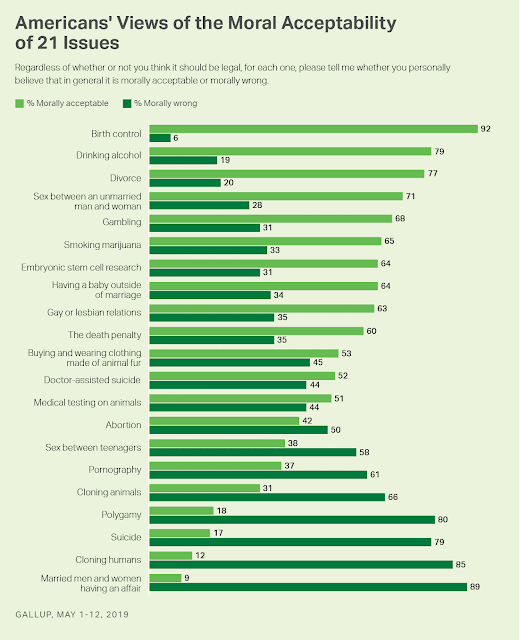 "Still, the prissy banning of words by academics should be resisted. It dumbs down understanding of language: word meanings are conventions, not spells with magical powers, and all words have multiple senses, which are distinguished in context...."

Which reminds me of what I wrote in the post, Swearing Children


"The world would have held carbon emissions steady since 2007 if it wasn't for the huge increase from China and India."

18. This paper shows, "no evidence was found to suggest that this medium was positively related to real-world violence in the United States. Unexpectedly, many of the results were suggestive of a decrease in violent crime in response to violent video games"

This sociology textbook cites the same paper to claim, "there is a relationship between violent video games and aggression in the player."

Why do research if people are going to make stuff up?

19. CNN reports that high-level radiation spots will be present at the 2020 Olypics in Japan. It cites a study done by Greenpeace. Some people disagree claiming Greenpeace did the analysis at the wrong elevation.

20. A guide to drinking: what is true and what is not. By my brother.

21. Donald Trump has been impeached, which anyone should have predicted. Here is some information about impeachment: 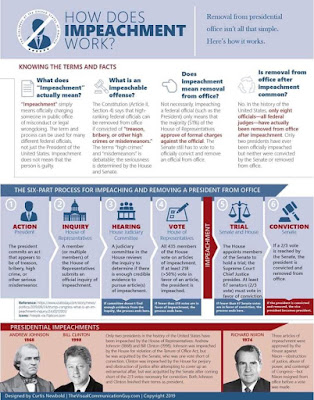 I don't have strong opinions on impeachment, but I check election betting odds frequently. Donald Trump has never been above 50% until news of his impeachment broke.

22. Ever hear that suicide rates go up around this time of the year? No it doesn't. It actually goes down.

24. It's never a bad time to review the profiles of the hidden tribes.

27.  "The world would have held carbon emissions steady since 2007 if it wasn't for the huge increase from China and India"

28. Allsides rates Vox's political leanings with their furthest left rating. They used to give Vox a "leans left" rating. I read someone recently who said Vox's left turn was the result of Ezra Klein stepping down as editor-and-chief in 2017.

The media bias graphic from Allsides, which one is most objectionable? 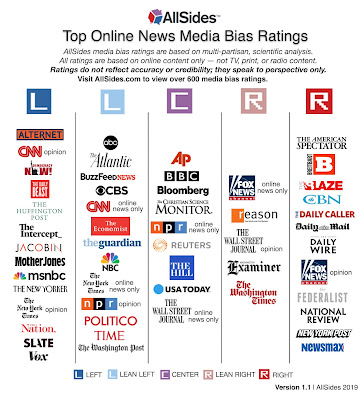 29. A sociology textbook cites research to prove the opposite of what the research says.

30. Using combinations of personality traits one can predict whether one is male or female 85% of the time. Must be because we give girls dolls.


"There now exists four large-scale studies that use this multivariate methodology (see here, here, here, and here). All four studies are conducted cross-culturally and report on an analysis of narrow personality traits (which, as you may recall, is where most of the action is when it comes to sex differences). Critically, all four studies converge on the same basic finding: when looking at the overall gestalt of human personality, there is a truly striking difference between the typical male and female personality profiles."

31. Related:  New York Times: The tendency for males to be more violent in girls isn't innate.

32. How do you earn more in Canada? Use your brain and work hard.

How to tell the difference? Look at self-financed campaigns to see if they're correlated with election success. (Spoiler: they aren't)

34. Thousands of people are bitten by venomous snakes every year, only a handful die.