The Dog Whistle Machine and Barack Obama: A Conversation

I already wrote about the Self-Reinforcing Dog Whistle Machine a few times. Most recently, I used the concept to describe the "Barack Obama as antisemitic" argument. If you package several ambiguous examples of antisemitism together it starts to look like overt antisemitism. That's because we naturally interpret each piece of evidence not in a vacuum, but in light of a reputation established by all the other pieces of information.

In case my point isn't coming across, in this post I want to oversimplify with a fake conversation, 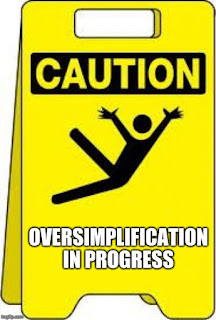 Jimmy Conservative: "Obama hates Jewish people"
Kate Liberal: "what's the evidence?"
Jimmy: "Well for starters, he refused to veto the anti-Israel U.S. bill was ranked the most antisemitic incident of 2016, he's constantly associating with known antisemites, antisemitic attacks spiked just after his presidency, and he says and does things against Israel's interests."
Kate: "Okay, so, let's start with the last one"
Jimmy: "Okay"
Kate: "Israel doesn't mean Jewish. It's possible to not be 'pro-Israel' on every last thing without being antisemitic.
Jimmy: "Usually, but we know who Barack Obama is. It's naive to think he's being anti-Israel for any other reason."
Kate: "On what do you base who Barack Obama is?"
Jimmy: "All the other antisemitic stuff he does"
Kate: Alright, so let's deal with the other stuff. You say Antisemitic attacks spike just after his presidency. That could just be a coincidence."
Jimmy: "Could be. But in light of all the other evidence, it would be pretty coincidental."
Kate: "evidence like his using "Israel" as a dog-whistle for "Jews"
Jimmy: Yeah, and all the other stuff.
Kate: "Riiiiight. So. He associates with anti-semites. You know, shaking hands with somebody doesn't mean you agree with them.
Jimmy: "On the surface, but in this instance, you have to look deeper. Do you really think it's a coincidence that the same guy who dog-whistles when he says "Israel", and who's presidency followed by the sudden rise of antisemitic attacks, is really shaking hands with all these antisemites is just being nice?"
Kate: "Um, yeah."
Jimmy: "So naive"
Kate: "Last one. Obama's non-veto was ranked one of the most antisemitic incidents of 2016 by The Simon Wiesenthal Center. This organization is constantly conflating Israel with antisemitism and I don't trust them."
Jimmy: "Kate Kate Kate. You poor naive girl. I'm not saying this organization is perfect, but the decision to rank Obama's decision as antisemitic is obvious. I mean, this is the same guy who dog-whistles when he says Israel, associates with known antisemites and incited the rise of antisemitic attacks. You have to look at the whole picture. Sure you should always give people the benefit of the doubt, but there's a difference between interpreting others in good faith and just being gullible. The facts reveal a pattern of antisemitism that's undeniable.

The Dog-Whistle Machine is a circular epistemology that self-reinforces low standards for facts by referring to other low standard facts. But a lot of weak evidence doesn't equal strong evidence. I say you should only lower the standards for facts once some facts have met a high standard. If Barack Obama was once caught on tape calling Jews a bunch of greedy dogs, then I'd readily believe that anything anti-Israel he did had an anti-Jewish motive. If that happened I'd see Obama in a new light. But nothing like that actually happened so I give Obama the same benefit of the doubt I would give anybody.