I used to be friends with this racist guy. Of course, he doesn't outright say, "I am a racist", so I didn't befriend him immediately. But over time I came to see the pattern of racism that I would have to be completely naive to ignore. He was an avid supporter of Donald Trump especially because of the anti-immigrant border wall stuff. He's skeptical of black lives matter and doesn't think cops shooting unarmed black men is a big deal. He told me Barack Obama "doesn't belong in the white house". He became noticeably uncomfortable when standing in line next to a black family. He insisted Black Panther was overrated. When I was driving with him he cut this old black lady off in the parking lot and didn't even acknowledge it. Instead of eating at the new ethnic restaurant down the street he wanted to go to Applebees. When we played chess he always wanted to be white. When we saw a pair of puppies he didn't pet the black one. He bought white Christmas lights instead of multicolored ones. And he likes country music.

Okay, fine, he stole my girlfriend, but it doesn't matter I'm being totally objective. This guy is a racist and you should hate him.

Each of these examples taken individually can be interpreted as racist or not racist. Everybody knows that you don't have to be racist to vote for Donald Trump. Being "noticeably uncomfortable" next to black people is an interpretation that may have more to do with me than him. And maybe he didn't like Black Panther because of it's godawful SGI fight at the end. 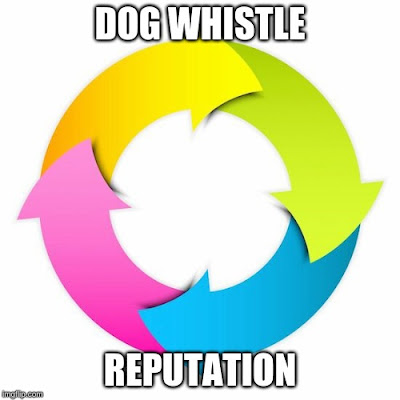 But when you build a reputation out of a pattern of examples, each individual example goes from probably not racist to probably a dog whistle. As the list grows longer, the benefit of the doubt lowers for each subsequent example. If you already have a backdrop of alleged racism in mind, even the most innocuous innocent act can be perceived as racist.

This doesn't seem so bad if you think you can only find patterns of racism in racists, but humans are prone to see patterns in randomness, especially when they want to. Life is so big that you can invent a pattern of dog whistles, especially if you have access to someone's long history through social media or life in the public eye. If you're always sniffing for racism so you can earn credit for calling someone out or you strongly dislike someone for their politics, it's easy to corrupt their reputation by uncovering a pattern of dog whistles. Once they're in the grinder, they can't escape. Their reputation is baked into the cycle, and all they can do is make excuses for their sin or repent.