I already wrote a post about how we're always confusing the symbol for the reality. So in the same spirit, I have to ask the question everybody's too obsessed with the symbol to ask, why did he put black paint on his face?

100 years ago people put on minstrel shows where white people would put on black shoe polish and depict black people as lazy, buffoonish, and superstitious. It was obviously racist, but instead of learning a smart lesson; don't mock entire races of people, society seems to have learned a stupid lesson; don't put black paint on your face!

As I write this I'm just now realizing how much I hate my society. Excuse me while I cry in the bathroom. 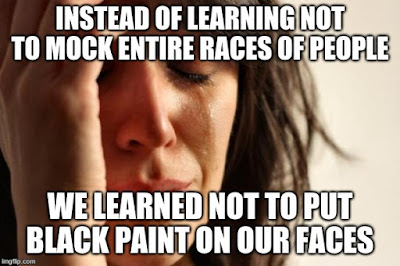 Was Justin Trudeau mocking black people like people who put on minstrel shows? Or was he taking part in a costume party with an Arabian Nights theme with belly dancers and middle-eastern music? Let's cancel cancel culture and start talking about real problems again.