What if Nobody Voted? 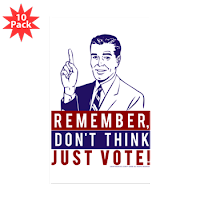 When I tell people I don't vote, after the other person calms down they always ask the same gotcha question. "what if everybody did that?"

We should make the decision to vote or not the same way we make other decisions in our life. Not, "what if everybody did that?" but, "what if 1 more person did that?"

I don't get in elevators that are already too crowded. I look and see what other people are doing and make my decision accordingly. Over 100,000,000 people vote in U.S. presidential elections. That's an elevator it makes no sense to get on. Researchers like Nate Silver did the math, if you're lucky enough to live in an important state the odds of your vote making a difference is 1 in 10,000,000. If you're average it's more like 1 in 60,000,000. It makes as much sense to play the lottery to make money as it does to vote to affect political outcomes.

"What if everybody did that?" is a fallacy, so why is it so appealing when we talk about voting? I have no way of getting into people's heads, but Democratic Fundamentalism looks like the best candidate to me. It at least explains why people get so mad when you explain the math of voting.