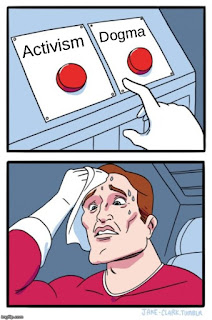 Activists have causes that they hope to resolve. They have ends they hope to achieve and they rally effort toward those goals. Dogmatists subscribe to a whole catalog of holy affirmations. They're a club bound together by a list of articles of faith.


At first glance, the sacred affirmations of dogmatist might seem to achieve the ends of a self-proclaimed activist. This makes it hard to tell the difference between the two. Is a women's rights activist really trying to achieve women's rights? or are they part of a sort of church with the stated goal of achieving women's rights, but they're actually trying to find the same purpose and community of a religious believer?


Lucky for us, dogmatists don't spend very much time thinking about whether their stated means achieve their stated ends. This means they're hostile to any heterodoxy that aims at the same purpose. When they say "we believe in A, B, and C to achieve Z," they hate it when someone comes along and says, "A and C doesn't work, B is overrated and actually X is a better way to achieve Z".

For an activist, this is useful information. "A new and better way to achieve Z! 'Let's think about that!" For a dogmatist, you've just spat on their articles of faith "how dare you question whether A and C work! And no true believer believes X!"

You can tell an activist from a dogmatist by how they receive heterodox suggestions.

Some concrete examples you say? Sure:

-Pro-life advocates say they want to reduce the number of abortions. Bombing abortion clinics is crazy, and they've had a tough time getting pro-life legislation passed. Why not try to make contraceptives more accessible? People can't have abortions if they don't get pregnant.

-Environmentalists say they want to prevent deforestation. But when you tell them that North America and Europe have more forests than they did prior to industrialization, and they're only increasing in forest area, they're not happy at the good news. They get mad. And they get really mad when you tell them it's because of climate change.

-Effective altruists for animal rights look like activists to me. They seem to care a lot about heterodox arguments for how to save animal lives. Eat larger mammals is good advice. If you eat beef for supper tonight you're killing 5% of a cow, if you eat chicken you're killing 100% of a chicken. They also seem to care when you mention the animal deaths of plant-based agriculture. When you add up the deaths of animals like mice, gophers, and pheasants, eating vegetables might kill more animals than eating beef. This is the kind of argument I dare not mention to most of my vegan friends because their hostility is highly predictable.

-Anti-poverty advocates fight a war on poverty, but they deny, ignore, and even hate the fact that Wal-Mart is one of the best anti-poverty programs out there. Some economic estimates of the consumer surplus people receive from Wal-mart is in the billions of dollars annually. Some people at MIT find Wal-mart saves people about 25% on food expenditure. These savings go disproportionately to poor people who shop at Wal-mart, yet anti-poverty advocates either don't seem to care very much or are hostile to such heterodox thought. Either way, they refuse to learn a single lesson from Wal-mart's effect on poverty

-Trumpian Conservatives want to build a wall, but they don't seem the least bit deterred by the fact that most illegal immigrants cross legally and overstay their welcome. It seems like that should at least somewhat reduce your confidence in a wall, but the dogma reigns supreme. Moreover, if you don't like illegal immigration, one way of reducing it is to modify the terms of which foreigners can immigrate legally. Trumpian conservatives seem uninterested in doing that.

- Small-government conservatives say they are sick and tired big-government. So what do they want to cut? Defense? Social Security? Health Care? These account for most government expenditure, yet all three poll popularly among conservatives. So what do they want to cut? Foreign aid? That's a morsel of federal spending. Waste? Good luck. Conservatives, like most people, are ignorant of what the federal budget even looks like. But if you inform them so they can better decide what exactly they want the government to cut, they're not willing to listen. 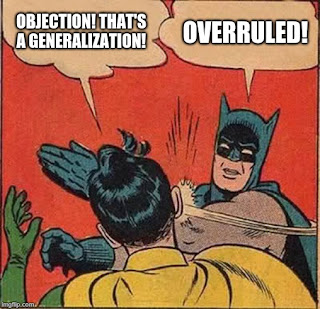 If you're in one of these groups, you may have noticed that not all members of your group are hostile to heterodox advice. Some pro-life people try to make birth control cheaper and some vegetarians are totally concerned with the animal deaths in plant-based agriculture. I'm sure you're one of these wonderful exceptions. But look at your group objectively; is the average member really receptive to alternative methods of achieving the same goal? I think not.

You also might have noticed much of this heterodox advice isn't thought through. Fair enough. I'm not saying it's right. But ex-anti they're at least plausible, and yet dogmatists reject them at face value. Moreover, after digging into the weeds of these heterodox arguments they predictably come out to the same conclusion. The orthodoxy that they always believed in the first place coincidentally turned out to be true. Every. Single. Time.

You also might notice that if what I'm saying is true, perhaps most self-identified activists are actually dogmatists. Sounds kind of cynical.

Yes. Yes it is cynical.

But given what we know about human nature, shouldn't you expect this to be the case? Humans are instinctively social creatures. So why be surprised that doctrines are primarily affirmed to navigate social clubs? Humans are not impulsively virtuous creatures. Virtue takes work few are willing to put up with. So why be surprised that people don't form social groups to achieve virtuous purposes?