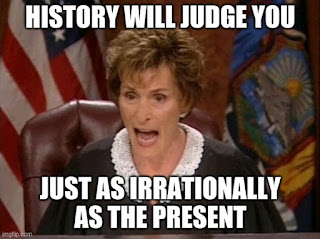 You have been told, "history will judge," but I tell you, history is a bad judge.

History will certainly judge us, but it will do so with the same status quo biases, emotional appeal, and general irrationality as we have. Tomorrow they won't be immune to the same mechanisms that make us wrong today. Future generations will be selected for by a past of more impactful tactics, but that won't make them more enlightened.

We are all concerned with our legacy, but that's a bias not an argument. If it appears history will judge you right, that's a reason to be more apprehensive, not more confident. It should be understood as an suggestion to make sure you're not choosing your arguments for the wrong reasons. If someone told you during WWII, "the Nazis are going to win and then judge you later," would that be persuasive?

As a matter of fact, we are concerned with history's judgment, but it's not the judge we should be concerned with. This makes it thought-provoking why someone would say it out loud. Social appeal works as manipulation of subconscious social incentives, but it is very strange when it's made so explicit. "Your idea isn't very popular" is just as convincing as, "your idea won't be very popular." We usually do care about the popularity of what we think, but we'd like to believe that we think it because it's right.

The appeal of this kind of rhetoric is exactly why history is likely to fail as a judge. If "history will judge" is the kind of argument that persuades now, then the future of persuaded people will make that same judgment. That doesn't make it right now, and it won't make it right later.