The Line is Drawn at Sacredness not Severity 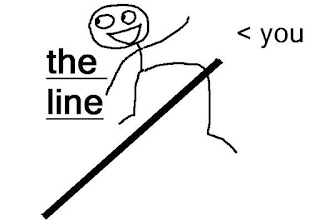 Have you heard of The Line? It's the line you're not supposed to cross. It's invisible so it's kinda vague whether or not you crossed it. People seem to think it's in different places so it's even harder to tell if you've crossed it.

We talk about "The" line as if it's one line that we all agree to. But that's not quite right. There are multiple lines for different people. What crosses the line for one person does not cross it for another. The ambiguity is killing me.

Today I want to define the great line. 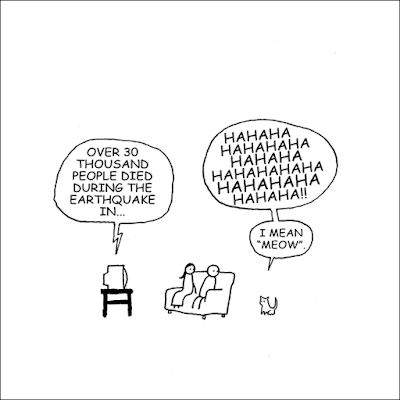 I propose that The Line is drawn at sacredness, not severity.

There's a lot of overlap between sacredness and severity, which is why people get very confused about where the line is. Dark Humor is the perfect control because it catches the severity without the sacredness. Once the dark humor becomes just dark, you know you've stepped on something sacred and crossed the line.

I can tell this joke at work. It's dark, but nobody is going to report me. It's not generally interpreted as a sexist joke, but a joke about murder, because murder = fine, but sexism = not fine. If someone did interpret it as relevant that it is a woman not a man who's being ground up and in the freezer I would be very concerned about losing my job.

Along the same lines, rape isn't funny... unless it's male rape.

Child abuse isn't funny, unless it's my own child. I can joke about going home and locking my kids on a snowy balcony so I can have some quiet time. They know I don't mean it and nobody takes me seriously. If anyone takes my children sacred it's me, but once I show that I can joke about it then you can laugh about it. But if I joke about locking your kids on the balcony that's inappropriate.

Children are sacred in mainstream society, which is why dead baby jokes or Dave Chappelle's child molestation and school shooting jokes have a fringe audience, although standup comedy has always been known as a context where little to nothing is sacred.

Murder, serial killing, and Hitler are all really bad, but we regularly make fun of them. These things don't have a universal sacred spot in our public consciousness. But in special contexts, these items go from bad to bad and sacred, which is when all the laughs turn to uncomfortable silence. Maybe their friend was just murdered. Maybe there was a school shooting yesterday. Maybe they're the child of a holocaust survivor. It stops being funny when you're around someone who has a special reason to treat these topics as sacred.

For some public tragedies, the sacredness wears off over time. If it hasn't, then it's still "too soon". We didn't discover that 9/11 was less bad as time went by, it's just that the sacredness of the event has been slowly wearing off. Some day it will be where World War 2 and Hitler are, but not until the people who remember it and treat it with the most sacredness pass away.

Just after a school shooting, you'd better not make a mass murder joke. After a week it's fair game.

Nationalism is a sacred subject for patriotic folk, which is why the Puerto Rican Day episode of Seinfeld stirred up controversy. Good loyal Americans don't joke about the sacred signs, songs, and symbols of America. Don't joke about burning flags or substitute the words to mock the pledge of allegiance.

Similarly, the military is a no go zone for patriotic people.

Different groups hold different items sacred to different degrees. This makes all the experiments convoluted. But when I map the line to sacredness it fits too perfectly to ignore. The utility of this knowledge; you can learn a lot about what a group holds sacred by what they won't laugh at.