I have several spurious thoughts at this point on Coronavirus. Here they are:
Where we're at as of today 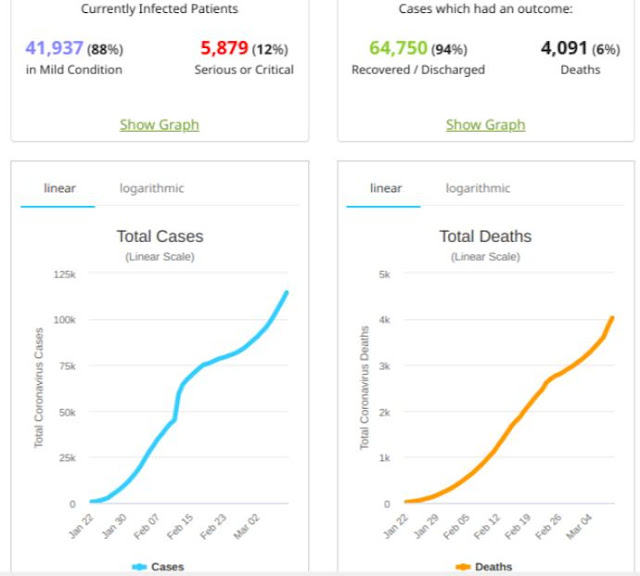 -Regardless of whether Coronavirus kills many or kills few the same people will claim it proves we overreacted/underreacted.

None of them are right, but none of them will see it. The sad truth is that whatever happens, the experiment will be inconclusive - at least from a surface perspective. Later on, higher resolution data will come out and be argued about for years.

-Tyler Cowen writes about two ways to think about Coronavirus.

Base Rate thinking is tried and true. Meta-rationality is about knowing what we don't know and therefore putting a lot of stock on base rates. This is the most important lesson to learn from Superforcasters. The base rate for recent global pandemics like SARS and Ebola is that they fizzled out. Our track record for predicting large important events is abysmal. People are too excited to be prophets of catastrophe, especially since we rarely penalize false predictions after the fact.

Exponential Growth Thinking is not concerned with current rates of contraction or death, but the potential for them to grow very quickly. Much like if I double $1 many times it becomes $1 million very quickly, Coronavirus has the chance of hopping on Moore's Law and multiplying very very quickly.

Which view is right? Many dubious hysterias were based on projecting from exponential growth, famously Malthusianism, but base rates have to be wrong at least sometimes. I think the proper Beysian procedure is to start out a strong base-rater and become more and more of a growther each day that Coronavirus spreads.

-"It's wild to see polarization on Coronavirus. One group's panic seems to be driving another's nonchalance and vice versa. While there is definitely a political overlay, it seems to be something deeper for most people: An instinctive belief that the world is hard to wake up from sleepwalking, or that the world is full of dumb panic." -Michael Dougherty

- It's easy to accuse base raters of being sleepwalkers, or Growthers of being stupid panic-ers. Like many issues, there's a dumb side and a smart side within each side. We should be wary of feeds that zoom us in on the dumb people on the other side.

-Jacob Falkovich, a blogger I like a lot, is an exponential growth thinker and is advising people take action by stocking food, water, and oxygen saturation monitors. Read Scott Alexander on the topic of preparation too. 2 weeks of extra supplies that you'll use anyway only costs extra space in the long run.

- Much of the current skepticism is fueled by patterns of fear-mongering. Circulating memes like the one below are dubious - they don't even use the right years, but they resonate because the public has heard wolf cried so many times. 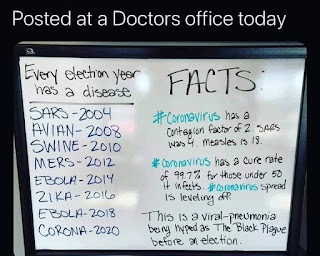 -It might seem like we've already let the topic become political, but it doesn't break down neatly into standard partisan politics. FiveThirtyEight cites evidence that right-wingers are more likely to downplay the virus than leftists, but they conclude that it's not a very big effect and it can be attributed to regional demographics.

Nonetheless, it seems like people are quickly choosing "sides" of the issue even if those sides don't carve up neatly between left and right. It seems like Americans are addicted to running the war app in their brains regardless of the issue or stakes.

-Some people seem to be working very hard to make the issue political. People like Paul Krugman are calling it Trumpvirus, some people are calling non-believers racist because they saw someone somewhere do something on the internet, even The World Health Organization is inviting anti-woke backlash. 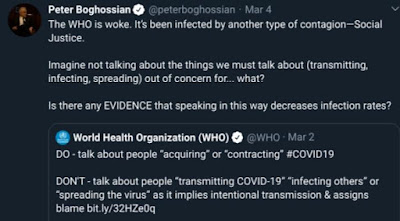 And then Trump Jr. says things like, "for Democrats to try to take a pandemic and seemingly hope that it comes here and kills millions of people so that they could end Donald Trump's streak of winning is a new level of sickness."

I'd just say, beware the Al Gore effect. Marking a side of the issue with your side's political stamp is likely to be counter-productive.

- I don't know how to assess Trump's response to the virus. He signed an $8.3 billion emergency spending bill. His recent tweets on the subject can be interpreted along the lines of "stay calm" or trivialization depending on which team you're on.

Some people claim the Trump administration defunded the Center for Disease Control, but that turns out to be factually inaccurate. He proposed cuts but they haven't been enacted. Even if they were, Coronavirus wouldn't prove it was a mistake any more than 9/11 proved we didn't spend enough on defense. There is some optimum number of dollars to give the CDC and Coronavirus doesn't prove we're above or below it.

This is one of a series of posts on Covid-19. Here are some others: