Rewire your Brain to be Skeptical 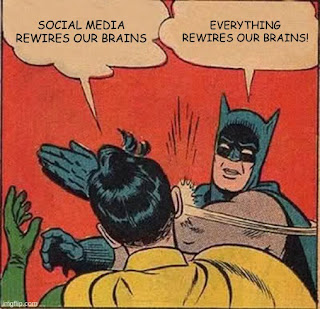 When I'm told that something is rewiring our brains, I'm skeptical. The bad version of the story usually pertains to things that accidentally rewire your brain like smartphones, pornography, social media, or wifi. The good version usually pertains to things we can do to deliberately rewire our own brains, like brain training or meditation or cognitive behavioral therapy.
There's an ultra-defensible version of the rewire your brain story. It says that basically everything rewires your brain. That's just how the brain is. "Neuroplasticity is the capacity of nerve cells to biologically adapt to circumstances." Every thought, idea, memory, or feeling, no matter how minute, tracks a change in the brain. When someone says, "listen to music to rewires your brain," or, "go outside to rewire your brain," or, "read books to rewires your brain," in a trivial way, they're right. But whenever you spend time doing something instead of something else is rewires your brain, so why is this interesting? Why point out some particular activity when all activities have this effect?
I think they use this term because it sounds like something more novel and semi-permanent. A wire is meant to stay plugged in. When I'm told something rewires my brain I expect this change to be sticky. I expect it to be stubborn. It sounds like a hardware change that isn't easily changed back. When someone tells me something will rewire my brain, my skeptic senses perk up. What you're saying sure sounds a lot like a software solution solves hardware problem, which violates a whole lot of intuitions about how physics works.
They don't mean that, but they know that that's what it sounds like. That's why all this rewire your brain stuff is so often described in the context of a strategy or warning. I can be a better person if I could just rewire my brain. I could be a worse person if I let X, Y, and Z rewire my brain. Brain rewiring doesn't make you a different person. It's the deliberate manipulation of something that is fundamentally malleable. That can be very good and useful, but calling it "rewiring" gives the wrong impression. You say you rewired my tv, but you really just changed the channel. Just as easily as a new habit can rewire your brain, replacing the new habit with old ones will rewire it back.
This fits with all my experience with activities that supposedly rewire my brain. When I put down my cell phone for 24 hours I feel like a new man. When I exercise in the morning I feel happier throughout the day. But when I pick my cell phone back up or stop exercising I very quickly lose everything I've gained. When they told me these things would rewire my brain, it didn't sound like they meant it in such a trivial sense. 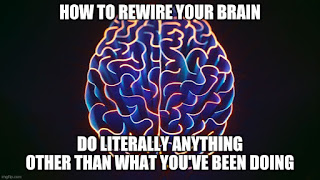 I think about the brain in terms of what the brain is and what the brain does. When we hear "rewire your brain" we think we're changing what the brain is, but what we're really changing is what the brain does. It's more like installing a new program than rewiring a hard drive. Just as easily as I installed a new mindset via habit formation, it can be uninstalled when the habits change, but the mind-hardware underlying either mindset is fundamentally the same.
Of course, the brain isn't' a computer, but I'm not the one who came up with the "rewiring" analogy!
This all looks like a Motte and Baily to me. In one sense, it's ultra defensible because basically everything rewires your brain. In another sense, it's used to communicate a novel semi-permenant hardware change. It doesn't mean rewiring in the weak sense doesn't work or isn't useful, but it does mean it's less powerful or interesting a claim as it is initially made out to be.